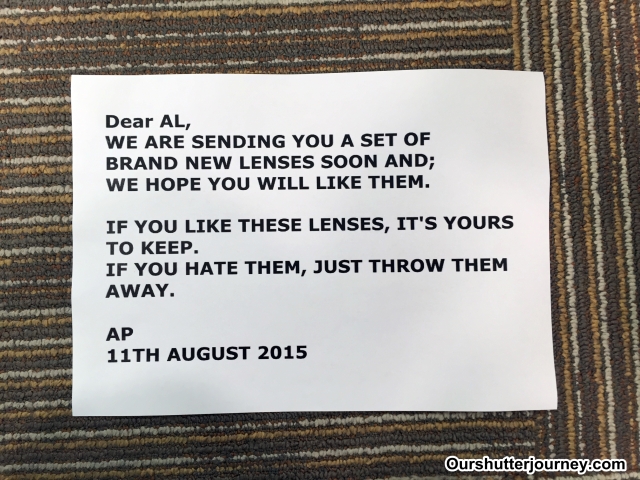 Photo: Actual Note that was left at my door.

11th August 2015, Singapore – As a reviewer for camera gears for some time now, it is usual to have brands popping up surprises once a while leaving us thrilled and sometimes adrenaline rushed. But first time that I actually have an anonymous note left at my door with a message like this.

“Dear AL,
WE ARE SENDING YOU A SET OF LENSES SOON AND;
WE HOPE YOU WILL LIKE THEM.

IF YOU LIKE THESE LENSES, IT’S YOURS TO KEEP.
IF YOU HATE THEM, JUST THROW THEM AWAY.

I promptly posted this on my Facebook and received quite a fair share of attention as well as suggested possible senders by my peers.

Although many had mentioned that if I am to throw away the lenses, I should throw it to them, there are some really interesting comments though.

Johnson LovesDarth Ang said: But seriously. …it’s Associated Press and they want u to test the lenses in the Gaza Strip

Royston Ang said: Are they referring to reading lens or glasses? Hoho…

Chester Chen said: If suddenly and secretly this note show up at your door then maybe — A Pontianak

Todd Beltz said: Sadly it’s probably just a hoax. No camera brand would just give away lenses to try and then say throw them if you don’t like them. Could be a marketing gimmick. Curious to learn what it could be.

And Chester added further;
Chester Chen said: Later a box of Contact Lenses show up at your door.

Well, so who is “AP”?
What “Lenses” is this person talking about?

I am anticipating what’s going to show up at my house soon. Will keep everyone posted. Just hope this is for real. 🙂

Meantime do check out our Exclusive Samsung Sales here.

About The Web Editor: http://about.me/shutterjourney
View all posts by Editor AL →
This entry was posted in Photography Articles & Videos and tagged ourshutterjourney.com. Bookmark the permalink.