04th July 2017, Singapore – So recently there’s been a lot of questions asked about Sigma’s latest ART Series lens, the 135mm F1.8 DG HSM | Art. Instead of just shooting with the lens and write a review, we decided to take the lens and shoot with it side by side with the Canon EF 135mm F2L USM. While the Canon EF 135mm F2L USM had long held the unofficial title of being the “King Bokeh-licious portrait lens” for a really long time, the new Sigma 135mm F1.8 seems to be going the same route as their previously released & world-recognized 50mm F1.4, the mighty 35mm F1.4 or even the 24-105mm F4 and if you are thinking what I am thinking, yes, Sigma is definitely going after Canon users with an alternate lens that promises better quality build and better images, and if we get lucky – better priced too.

From our understanding, the existing & ageing 135mm lenses from the various makers had been around for a pretty long time (you can google this yourself) and what Sigma did was brilliant – design a brand new 135mm that is meant for the current crop of newer DSLRs which produces much higher resolution images and still produces that addictive bokeh and sharpness even when shot wide open – a feat if you ask me. Just like the saying goes “it takes a smart mind to design an original and a smarter mind to improve it”.

Before we proceed further, and as usual, we would like to disclaim that we are really more interested in the lens performance and the images that it can produce. If you end up here looking for technical information probably you would like to stop reading and pop over to Sigma’s official site. Over here, it’s sharing of user’s experience and a layman review that others can understand. If you are cool with this, read on.

The 135mm had always been widely used for various genres mainly by professionals. As a medium telelphoto lens with a really wide aperture, the 135mm is well suited for wedding photography, documenting events, portraitures and given the speed, it can be used for certain sports and for capturing action-packed activities. The Sigma 135mm was given the ART designation and this means this lens is made as a premium lens sitting higher on the product line and it’s targeted at professional & advance users. Made compatible with Sigma’s proprietary USB Dock (MC-11), now pros have more avenues for tweaking and fine focus adjustments.

The lens build is no doubt one of the best as expected from an ART lens. The TSC based material gives the lens a super hardy feel and the switches are well positioned allowing users to make adjustments without really having to take the eyes off the viewfinder and the focusing ring turns smoothly with a hint of Leica-ish feel to it. Elegant looking and ergonomics well sorted, the Sigma 135mm is way ahead of our times. At 91.4mm x 114.9mm, this lens is not small and thankfully it weights at an useable 1130gm which will not break your hands if you use it for a full day shoot. 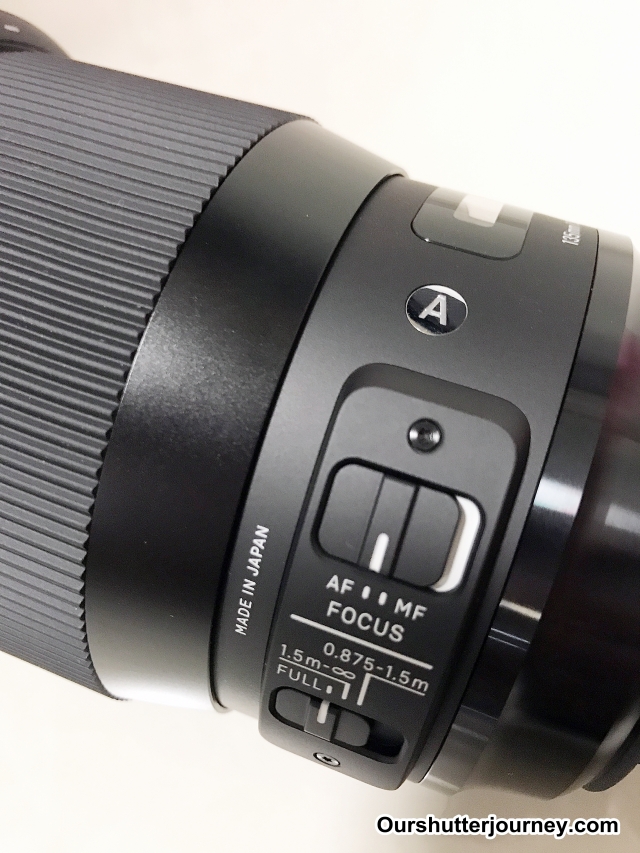 Inside the Sigma 135mm F1.8, the glasses are arranged into 13 elements in 10 groups. From the drawing that Sigma had provided, it seems to suggest that the “floating” group are probably ED & LD  elements – so it means no matter what range you are focusing on, you get crispy sharp images. Powered by a much larger Hyper Sonic Motor (HSM), this reduces drag and focusing speed becomes turbo-charged while maintaining the silent operation. The 9 (rounded) blades F1.8 aperture seems like a mild improvement when compared to the existing F2 from other makers but we believe most of you out there will still shoot at F2 anyway. As mentioned earlier, the Sigma 135mm was designed for the newer DSLRs, which many users are already finding that the older legacy lenses are not doing any justice to the newer camera bodies. The front of the lens accepts 82mm screw-on filters & the Sigma 135mm was made as a dust-proof and splash-proof lens – luring users to bring it outdoors without fear of bad weather.

And so, we took the new Sigma 135mm F1.8A, the Canon 135mm F2L out to a local park and shot comparatively with both lenses. Do check out the images below – shot by the same camera sequentially with both lenses at the same settings and environment.
All images are viewable in 100% so just click on it and view at full size.

The camera, a Canon EOS 5D MarkIII was set at the same settings for both lenses. From the above images, do pay your attention to the leftmost palm tree – you can visually see the bokeh are more creamier than the shot done by the Canon EF 135mm.

The above shot of the bench looks similar on first look. Even the out-of-focus area like the pebbles in the foreground all look similar. But if you take a closer look at the plants on the left side near to the bottom, you can see the Sigma’s bokeh are much smoother than the shot produced by Canon. 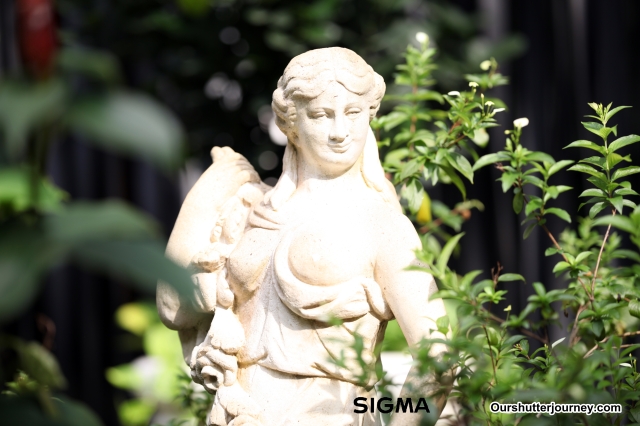 OK this is tough. I spent some time trying to “spot the difference” and can’t really find any. Except that the color of the plants are slightly more rich from the Sigma 135mm and the Canon 135mm colors are slightly dull. Although this can be corrected during editing, direct color rendering saves us time during editing. Don’t you agree?

The next few images will be me shooting a scene and cropping out part of the image to see the sharpness – and the Sigma 135mm does not disappoint. 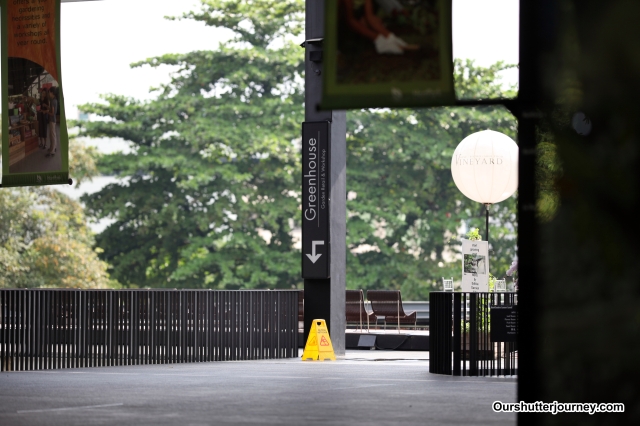 (above) I took a shot. I focused on the pillar with the words “Greenhouse” and shot at F2.

(above) I am cropping out the box in red as marked above.

(above) after cropping – just see for yourself how sharp the Sigma 135mm can be. Do not forget I had cropped.

And since the 135mm range is medium telephoto and mostly used for portraits, here’s a few examples below of my friends – shot with both lenses –  as a comparative example. 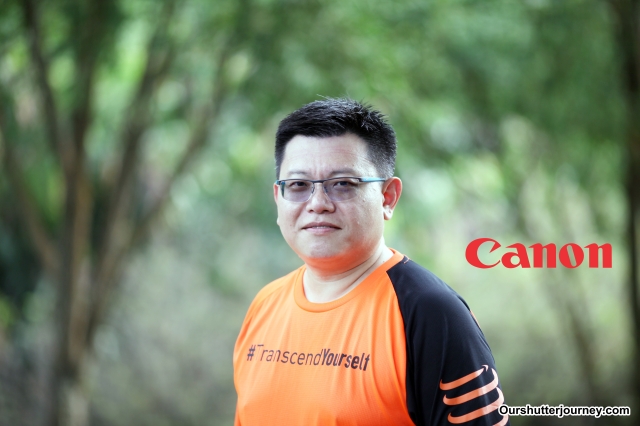 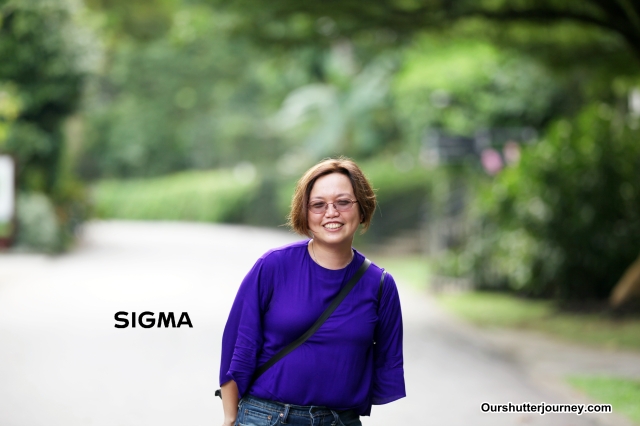 And the scarecrow too. 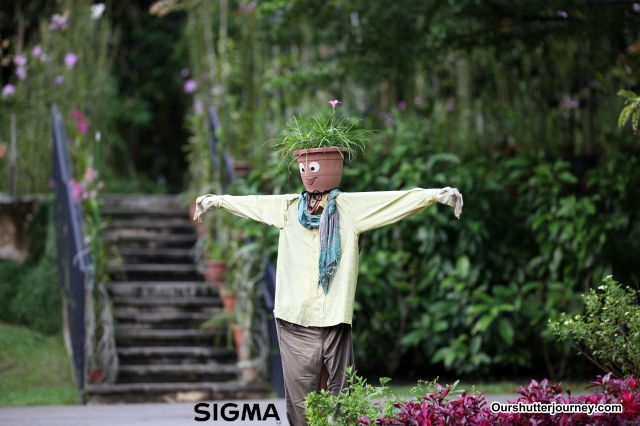 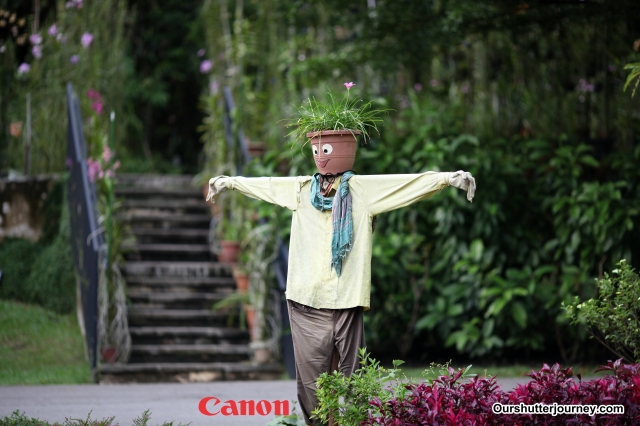 From the above images, you will notice that the bokeh from the Sigma 135mm is more defined yet creamy without any loss of “out-of-focused” details while the ageing Canon 135mm gives you either a creamy bokeh with near-zero details or the bokeh just “flakes out” leaving the user with “other this or that”. While the Sigma 135mm gives you the best of both worlds and in a near-perfect balance.

From the images that I’ve gotten from both lenses, it is evident that the new Sigma 135mm is designed, configured & built to meet the specs of DSLRs of today (or this era) for managing the higher resolutions that camera sensors of today are capable of.

Like the famous saying goes, “Do Not Pour Old Wine into a New skin” and in photography context, why use old lenses designed for low megapixel cameras on your 24-36mp? I am not saying that it will not work – but the question is – are you doing justice to your photos?

Nothing much to say except that you can click on the link above to find out who we are and here’s an image of our Editor AL.