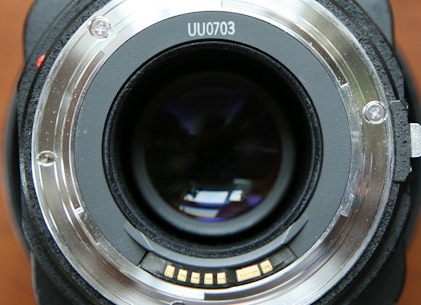 Look to the rear of your lens where the lens mount is, you will find a row of Alpha+numeric code there. Why is it important to know what are these numbers? Buying a new lens in the open market can be deceiving. Let me share an example. Some shops may quote you say for a NEW Canon EF 50mm F1.8 MarkII for SGD $130.00, while some may sell you the very same lens, also NEW at a mere SGD $75.00. Why so? Both are new and still in their factory packaging! Well, lens code is at play here. You may wish to translate that to “Date of Production”. The SGD $75.00 lens may be older than you. 🙂

This code, also help those who buy used lens or vintage lenses from the used market as Canon marks their lenses way back from the pre-FD days (1960) till the Film-to-Digital Revolution where EF (now) rules (90s to Present).
So what exactly are those Codes? What they stands for?

Picture: FD Lens Rear with just the Year without the Name of Plant.

I will use EF lenses as the guide here as it is the current line of lenses from Canon. Canon Lenses are made from all over the world. Or should I say assembled. From the lens boxes, usually I see “Made In Japan”, but upon close scrutiny of the lenses, I discover markings like “Malaysia”, “Taiwan”, “Thailand”, “China”, etc. I hope these are just limited to accessories and not the physical lens and its elements though.

So now you know the first letter of your lens. So what about the 2nd letter?

OK, I am unable to confirm that Canon will continue and restart the code system from “A” again for lenses manufactured from year 2012 onwards, but it seems pretty likely they will continue as it had worked well for the last 51 years.

So by now, you know where your Canon lenses were made and in which year they were put together. So what about the numbers?

A quick search on the internet reveals that the next 2 numbers are the “Month” of the manufacturing year. For example;
a lens code with “UT0736” means this lens was manufactured from Canon’s Utsunomiya Plant in year 2005, in July.
Easy isn’t it?

Voila! Now you know what Lens Code stands for.
Hope this article help you in your next Canon Lens purchase from your local retailer or from the used market.

About The Web Editor: http://about.me/shutterjourney
View all posts by Editor AL →
This entry was posted in Brand: Canon, Uncategorized and tagged Canon, DSLR, EOS, Lens, Lens Code. Bookmark the permalink.